Young hero Nikhil who scored super hits like 'Karthikeya', 'Surya vs Surya', 'Ekkadiki Potavu Chinnavada' etc is all set to come up with his upcoming movie 'Arjun Suravaram'.

Initially, the movie has titled the film as 'Mudra' but the makers have recently changed the title to 'Arjun Suravaram'. Touted to be an action thriller, Nikhil is going to be seen as a TV reporter in this film which is going to be the official Telugu remake of Tamil super hit film 'Kanithan'. As release date is approaching, the makers have finally kick-started the promotions of the film. As per the latest reports, the makers are going to organize the pre-release event for the film very soon. If the buzz is to be believed, Megastar Chiranjeevi who is currently busy with the back to back shooting schedules of his upcoming film 'Sye Raa Narasimha Reddy' is going to make some time to attend the pre-release event of 'Arjun Suravaram' as a chief guest. Considering the fact that Chiru is close to Tagore Madhu, Megastar is going to attend the event.

The official confirmation is yet to be announced. TN Santhosh who helmed Tamil version is also wielding the megaphone for Telugu version. Lavanya Tripathi played the female lead in the movie which is slated to get the screens on May 1st. 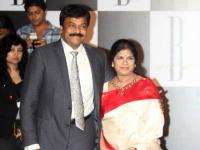